Adevinta announces the composition of its new Board, following the successful acquisition of eBay Classifieds Group

Oslo, 30 June 2021: Adevinta ASA (“Adevinta” or the “Company”) today announces the new composition of its Board of Directors, following the completion of the acquisition of eBay Classifieds Group (“eCG”) on 25 June 2021 and the Annual General Meeting held on 29 June 2021. 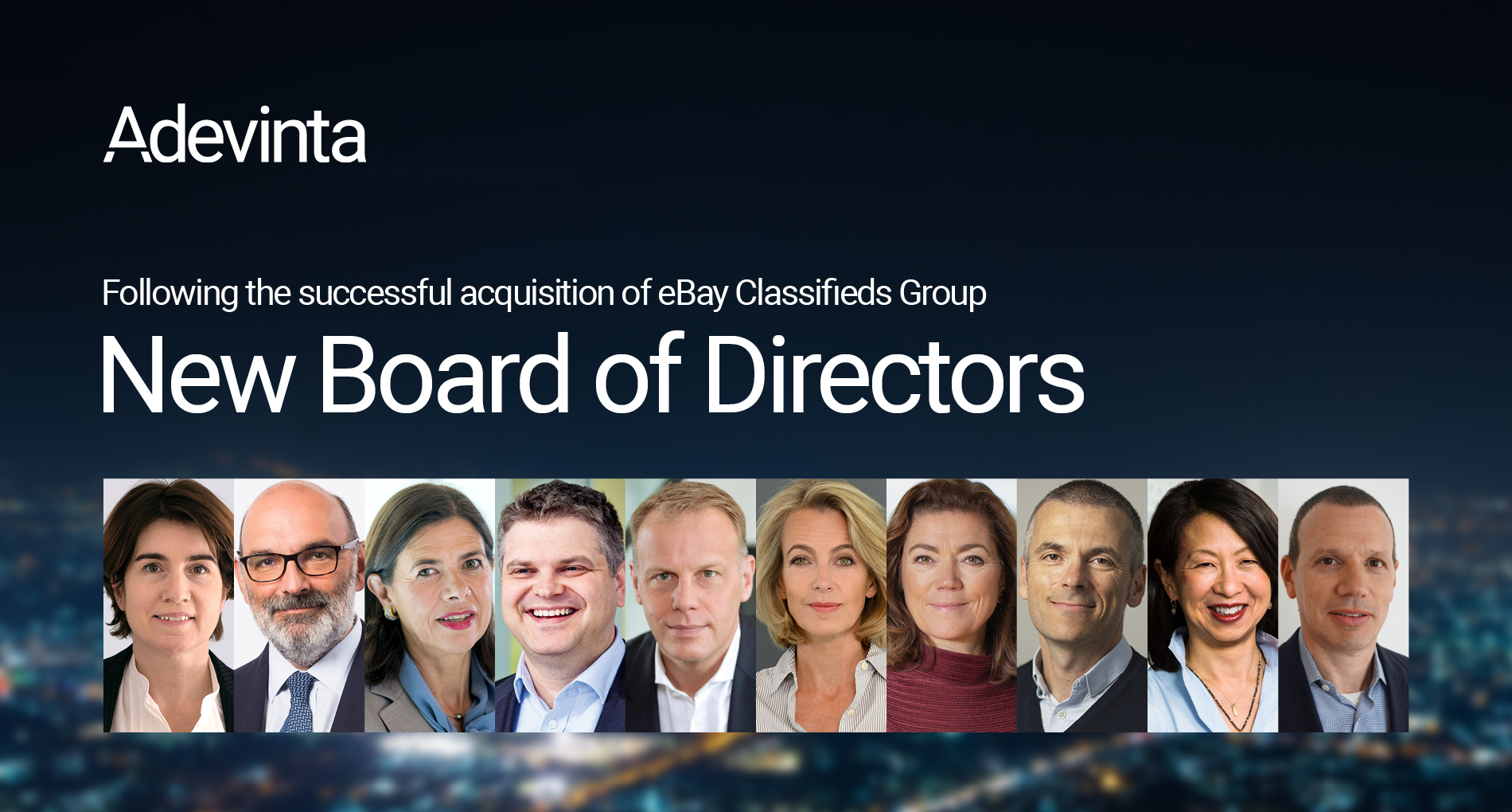 The composition of the new Board will bring a wealth of experience and reflect the diversity and the values shared by Adevinta. This marks a new phase for the Group under the leadership of Orla Noonan, who will continue to chair the Board.

In addition to Orla Noonan, the new Board of Directors comprises the following members:

Orla Noonan, Adevinta Board Chair, commented: “We are pleased that these high-profile leaders have joined Adevinta’s Board. They will bring a wealth of international business expertise from diverse sectors, including media, technology, digital innovation, integration and online marketplaces, which will help to strengthen Adevinta’s foundations and drive the Group to meet its strategic objectives. Together, we are aiming to support the executive team, sustain success and create value for all stakeholders.

“We would also like to take this opportunity to thank Terje Seljeseth for his close support and valuable contribution to Adevinta’s Board of Directors since 2019.”

Board of Directors’ biographies

Orla Noonan - Board Chair
Orla Noonan began her career in investment banking at Salomon Brothers in London, where she worked from 1994 to 1996. She then spent more than two decades working in content and media at Groupe AB in Paris, holding various management positions including Executive Vice President responsible for finance, M&A and regulatory affairs. She was CEO of Groupe AB from 2014 to 2018. Orla was also an independent Board member of Iliad SA ( 2009 to 2021) and of Schibsted Media Group (2017 to 2019). She is currently an independent Board member of Believe, SMCP and Agence France Presse (AFP). Orla is a graduate of HEC, Paris and has a B.A. in Economics from Trinity College, Dublin.

Sophie Javary
Sophie Javary has over 30 years of experience in investment banking, both within M&A and ECM. She is currently Vice-Chairman CIB EMEA atBNP Paribas. Her previous roles include Head of Corporate Finance, EMEA at BNP Paribas (2014 to 2018), Senior Banker at BNP Paribas (2011 to 2013) and 16 years at Rothschild & Co (1994 to 2011), where she was appointed as General Partner in 2002. Sophie was Director, Head of ECM origination in France at Baring Brothers France from 1993 to 1994 and held various positions at Banque Indosuez in Paris (1989 to 1992) and at Bank of America (1981 to 1986). She is a Board member of the Elior Group and of the think tank EuropaNova, and has been decorated with the French Légion d’Honneur. Sophie is a graduate of HEC Paris with a certificate from the international management programme following six months at the Fundação Getulio Vargas of São Paulo, Brazil, and six months at the New York University Graduate School of Business Administration.

Peter Brooks-Johnson
Peter Brooks-Johnson has been CEO of Rightmove, the UK’s largest property portal, since 2017. He began his career at Accenture UK Ltd, where he worked from 1995 to 2000, and then spent five years at Berkeley Partnership LLP from 2000 to 2005 as a consultant. He joined Rightmove in 2006 and held the position of Head of the Agency business from 2008 to 2011, Managing Director from 2011 to 2013 and COO from 2013 to 2017. Peter graduated with a MEng in Microelectronics from Newcastle University.

Michael Nilles (new member)
Michael Nilles has been Chief Digital & Information Officer of Henkel KGaA since 2019. Michael brings more than 20 years of experience spearheading digital innovation and large-scale transformations for multi-billion dollar global businesses and has extensive knowledge in building asset-light digital business models and platform businesses. Prior to his current role, he was member of the Group Executive Board and Chief Digital Officer (CDO) for Schindler, as well as the CEO of Schindler Digital Business AG. Prior to Schindler, Michael held various international leadership positions at Mannesmann and Bosch Rexroth in China, the US and Europe. He began his career as a software engineer and consultant at SAP. Michael has also served on private and public supervisory boards such as FogHorn Systems Inc. or Deutsche Lufthansa AG. Michael holds a Master’s Degree in Business Administration and Computer Science from the University of Cologne and is an alumnus of Kellogg School of Management, Northwestern University, USA.

Julia Jäkel - (new member)
Julia Jäkel is an executive with over 20 years’ experience in media and publishing industries. Julia has held various leadership positions in Bertelsmann SE & Co KGaA, and has served as a member of Bertelsmann’s Group Management Committee since 2013. From 2012 to 2021, Julia Jäkel was CEO of Gruner + Jahr, one of Europe's leading media and publishing companies. In addition, Ms Jäkel was Chairwoman of the Bertelsmann Content Alliance (2019-2021) which coordinates the Bertelsmann content activities in Germany (Mediengruppe RTL, UFA, Penguin Random House, Gruner + Jahr and the music company BMG). She also serves as a member of the Supervisory Board of the Hamburg Elbphilharmonie, is a member of the Board of Trustees of the University Medical Center, Hamburg-Eppendorf, a member of the Board of Trustees of the DFL Foundation (Bundesliga) and of the Supervisory Board of the Deutsche Presse-Agentur. Julia Jäkel holds an MPhil in International Relations from the University of Cambridge.

Kristin Skogen Lund
Kristin Skogen Lund has been Group CEO of Schibsted ASA since 1 December 2018. Her previous positions include Director General of the Confederation of Norwegian Enterprise (NHO) from 2012 to 2018, EVP of the Nordic region and Digital Services at Telenor, CEO at the Schibsted companies Aftenposten, Scanpix and Scandinavia Online and several roles at the Coca-Cola Company, serving as Director from 1997 to 1998, as well as Unilever and the Norwegian Embassy in Madrid. Kristin has previously served as president of the Confederation of Norwegian Enterprise and as a member of the Board of Ericsson and Orkla among others. Since 2015, she has been a member of the Global Commission on the Economy and Climate, and the ILO Global Commission on the Future of Work. Sheis also Chair of the Board at Oslo-Filharmonien. Kristin has an MBA from INSEAD and a BA in International Studies and Business Administration from the University of Oregon.

Marie Oh Huber (new member)
Marie Huber has served as Senior Vice President, Chief Legal Officer, General Counsel and Secretary of eBay since July 2015. In her current role, Marie leads the global legal, government relations and public policy functions for eBay. Marie and her team partner with the businesses to help drive the purpose and success of eBay and its global buyers and sellers. Prior to joining eBay, Marie spent 15 years at Agilent Technologies, a technology and life sciences company, most recently as Senior Vice President, General Counsel and Secretary. Prior to Agilent, she spent ten years at Hewlett-Packard Company in various positions. She started her career at large law firms in New York and San Francisco. Marie Huber also serves as a Director of Portland General Electric Company (NYSE) and the Silicon Valley Community Foundation. Marie has a B.A. in Economics from Yale, studied at the London School of Economics and received her J.D. from the Northwestern Pritzker School of Law.

Mark Solomons (new member)
Mark Solomons has served as Vice President, Corporate and Business Development at eBay since February 2016. In this role, he oversees eBay’s acquisitions, investments, acquisition integration, and various business development activities. Prior to joining eBay, Mark spent 19 years as an investment banker at Morgan Stanley and J.P. Morgan. Mark’s most recent role at Morgan Stanley was Head of West Coast Technology M&A, based in Menlo Park, California. Prior to his investment banking career, Mr. Solomons worked for Deloitte in various positions for three years. Mark has a Bachelor of Commerce in Economics from the University of Melbourne (Australia) and was admitted as a member of the Institute of Chartered Accountants in Australia. He also served in the Australian Army Reserve.

We use our own and third party cookies to measure traffic on our website and for technical, personalization and analytical purposes based on browsing data. To continue browsing the website you must accept or configure the cookies that will be applied to your navigation.For more information, you can review our Cookie Policy.

This website uses cookies to improve your experience while you navigate through the website. Out of these, the cookies that are categorized as necessary are stored on your browser as they are essential for the working of basic functionalities of the website. We also use third-party cookies that help us analyze and understand how you use this website. These cookies will be stored in your browser only with your consent. You also have the option to opt-out of these cookies. But opting out of some of these cookies may affect your browsing experience.
Necessary Always Enabled
Necessary cookies are absolutely essential for the website to function properly. These cookies ensure basic functionalities and security features of the website, anonymously.
Functional
Functional cookies help to perform certain functionalities like sharing the content of the website on social media platforms, collect feedbacks, and other third-party features.
Performance
Performance cookies are used to understand and analyze the key performance indexes of the website which helps in delivering a better user experience for the visitors.
Analytics
Analytical cookies are used to understand how visitors interact with the website. These cookies help provide information on metrics the number of visitors, bounce rate, traffic source, etc.
Advertisement
Advertisement cookies are used to provide visitors with relevant ads and marketing campaigns. These cookies track visitors across websites and collect information to provide customized ads.
Others
Other uncategorized cookies are those that are being analyzed and have not been classified into a category as yet.
SAVE & ACCEPT
Powered by